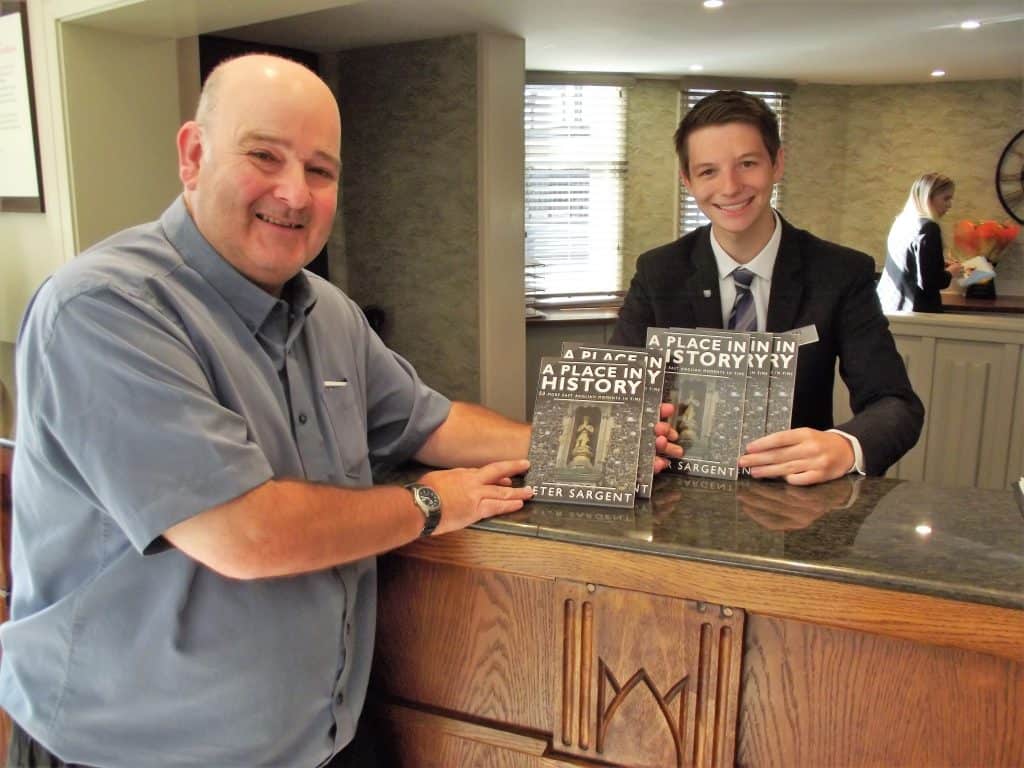 Peter Sargent delivering A Place in History to Ryan on Reception

On Friday, Peter Sargent delivered copies of his new book, A Place in History, 50 more East Anglian moments in time, which is now on sale at Reception.

A Place in History follows his first East Anglian history book, A Moment in Time, published in 2017 which is also available at Reception.

Peter’s new volume takes readers on a 2,000-year journey through East Anglia’s colourful and varied history. In a series of 50 short stories you meet kings and queens, such as Edward I and Katherine of Aragon, medieval saints, witches and clergymen, soldiers and sailors and revolutionaries at the Maids Head Hotel. 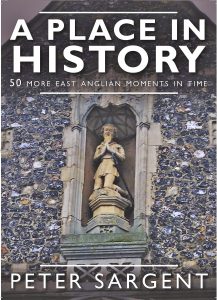 A Place in History

Peter Sargent has given us permission to reproduce ‘Welcome to the Revolution’, a 1791 story which talks about the Norwich Revolution Society, which met at the Maids Head and the revolutionary fervour in Norwich and Norfolk.

Welcome to the revolution

In the 1790s, as Britain geared up for war with France, the revolution began at the Maids Head in Norwich.

On July 14, 1791, the Norwich Revolution Society enjoyed its finest hour. Its members toasted the second anniversary of the French Revolution and the storming of the Paris Bastille. They put forward their very modern democratic ideas at one of the oldest hostelries in the city – and indeed the country – the Maids Head tavern in Tombland. The history of the Maids Head goes back to medieval times; it hosted the Bishop of Norwich in the 1090s, Edward the ‘Black Prince’ of Wales in the 14th century and (this is disputed) Queen Elizabeth I in 1578. Perhaps more to the point of this story, in 1549 it was used as a base by both Robert Kett’s ill-fated Norfolk rebels and the leaders of the government forces which eventually subdued them.

By the late 18th century, unrest was once again in the East Anglian air. Radicals met at the Maids Head and the Bell Hotel, in Orford Place. They demanded a new social order. The government of William Pitt the Younger cracked down on radicals. Such was Norwich’s reputation for dissent it was known as the ‘Jacobin city’ – a reference to the Jacobin extremists of revolutionary France. In 1794, with Britain in a desperate war with the French and fearful of domestic unrest, the Government suspended habeus corpus. This ancient legal right, enshrined from the days of Magna Carta, was an ordinary person’s protection against arbitrary arrest. To Norwich liberals its suspension was proof of government corruption. By the mid-1790s it is estimated the various radical societies had more than 2,000 members in the city.

Why was Norwich so radical?

The city was home to many textile workers. Most of them laboured from home, and enjoyed independence not known elsewhere. Norwich’s relatively broad electoral franchise meant a larger proportion of people from humble backgrounds had the right to vote for city officials. It led to a politicised population, ever ready to take to the streets to fight for their rights. To the mid-18th century writer Gilbert White it was a “great fractious manufacturing town”. In 1740 riots over the price of grain and fish had rocked the city, while in 1766 armed citizens had just about restored order after another bread riot. Also, the city had a long history of religious dissent. Baptists, Quakers and non-conformists had thrived there since the 17th century. Baptist minister Mark Wilks was a convinced radical, and he was not alone.

Of course, only a minority of Dissenters were revolutionaries, but their traditions made them receptive to new ideas. Ideas can be dangerous. None more so than those generated by the 1789 French Revolution. Initially it was welcomed by many in Britain as the dawn of a liberal era. Soon though, the violent excesses of the French radicals alienated many people. Politician Edmund Burke led the conservative backlash with his book Reflections on the Revolution in France. But the spark was ignited by a Norfolk man. Thomas Paine, born in Thetford in 1737, published The Rights of Man, partially to rebuff Burke. A clarion call for democracy, it inspired many throughout Britain – and appalled many others for whom democracy meant mob rule. Soon the London Corresponding Society was formed, a body of radicals influenced by Paine, and established links with other societies nationwide.

Historian E P Thompson, in his groundbreaking 1963 work The Making of the English Working Class, described Norwich as “by far the most impressive provincial centre”. From groups of working people gathering to discuss events, a number of societies mushroomed. They included the Norwich Revolution Society and the Norwich Patriotic Society. Members initially came from different walks of life. Grand patrician families supplied sympathisers from the Quaker Gurneys, bankers and founders of Barclays, plus manufacturer William Taylor, a renowned intellectual who preferred translating German romantic works to commerce. He was known as “Godless Billy” for his views. Soon after the 1789 uprising he visited Paris and returned brimming with enthusiasm for the revolution and its ideals.

Most activists were artisans, wage-earners, small masters and tradesmen; self-employed people without an unsympathetic employer who could sack them. These “urban craftsmen with long intellectual traditions” – in Thompson’s phrase – were radicalised. As they moved to the left they demanded democracy, an end to monarchy and aristocracy, and opposed the State, war and taxation. At their height the 40 or so societies boasted 2,000 members. They had links with colleagues in Wisbech, King’s Lynn and Great Yarmouth. Meeting in places such as The Bell – headquarters of the Revolution Society – and The Weavers Arms, home of the Patriotic Society, this was a grass roots movement. An intellectual journal, The Cabinet, provided a vehicle for radical views.

What was the reaction?

As war broke out in 1793 the government retaliated. The radicals became unpopular, as many saw them as traitors. So-called ‘Church and King’ mobs harassed known radicals, and many were arrested. As habeus corpus was suspended in May, 1794, radicals from London to Scotland, and Sheffield to Norwich were arrested. Isaac Saint and other Norwich committee members were hauled in. Juries proved reluctant to convict in such political cases. When two London men were acquitted of high treason that October, Norwich delegate Jonathan Davey was at the Old Bailey for the trial. He rode through the night back to Norfolk, and arrived at St Paul’s Baptist Chapel as minister Mark Wilks was in the middle of a service. “Praise God from whom all blessings flow,” declared Wilks when Davey told him the news.

But it did not result in eventual victory for revolutionary ideals. The mood changed, as Britain’s fight with first Revolutionary, and then Bonapartist, France became a battle for national survival in the 1790s and early 1800s. With Britain threatened by French invasion, most people rallied to protection of hearth and home. Diehards like Wilks kept their faith, preaching sermons. But when London radical John Thelwall toured East Anglia, things turned ugly. Although Thelwall spoke 22 times in Norwich, at Great Yarmouth he and his audience were attacked by sailors armed with cutlasses and cudgels. The magistrates at Lynn and Wisbech refused him protection.

And back at the Maids Head?

It wasn’t all radicals. A month before the 1791 revolutionary dinner, a very different party enjoyed the tavern’s hospitality. Parson James Woodforde, vicar of Weston Longville, near Norwich, kept a regular diary for many years. On June 15 he recorded that he and 35 other Church of England clergymen sat down to eat. The Bishop of Norwich chipped in, donating one bottle of wine between every two clergymen (bottles were much smaller then than they are today. . .) The Maids Head continues to thrive as a hotel in the 21st century, while The Bell remains a popular city centre venue.