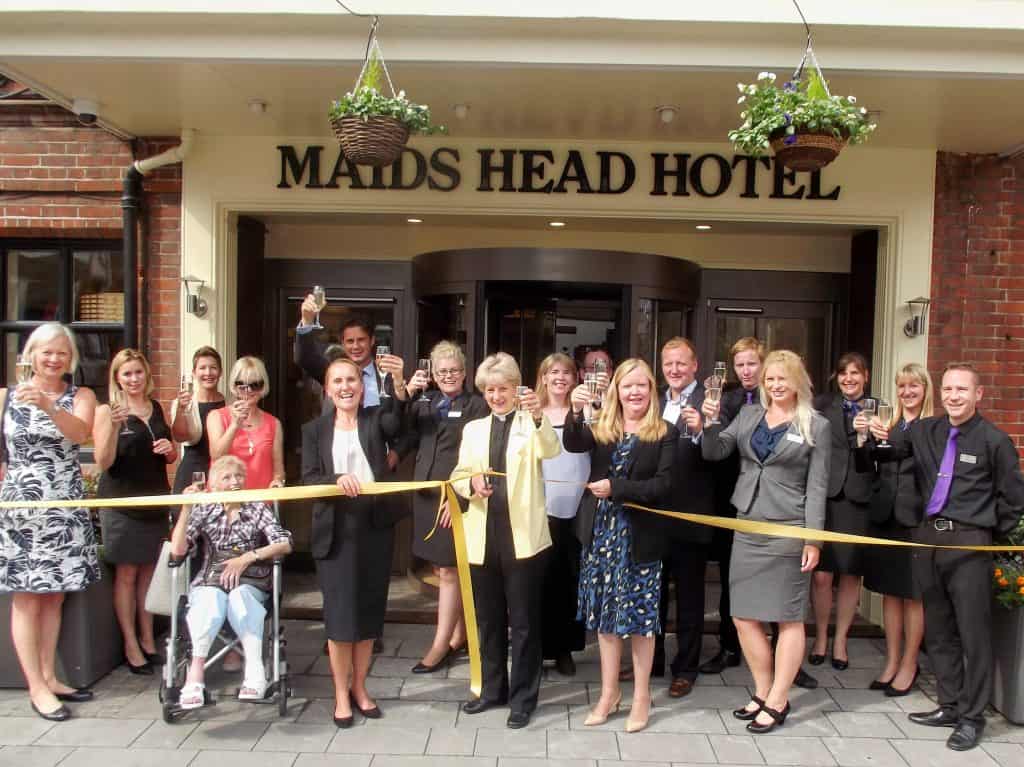 The Maids Head Hotel has completed a £150,000 project to refurbish the public lounges and reception and create a new entrance on Tombland, including a revolving door. The Dean of Norwich, The Very Reverend Jane Hedges, officially ‘launched’ the new entrance, on Tuesday, September 13.

Christine Malcolm, General Manager the Maids Head Hotel said: “The hotel has been privately owned by the Chaplin family since December 2012. Our owners have embarked on a range of sympathetic refurbishment and renovation projects, to ensure that our historic building meets the expectations of 21st century visitors. Our new entrance and reception area provides a much more welcoming environment with lovely views out onto Tombland. We have also been pleased to be able to work with a range of local contractors and suppliers on this project.”

“I would like to thank the Dean of Norwich for joining us to celebrate the completion of the project. The Maids Head has had a very long relationship with Norwich Cathedral. The first Norman Bishop, Herbert de Losinga, lived on this site. His palace eventually became the Murtel Fish Inn, which was the Maids Head’s predecessor. We are delighted to be working with the Cathedral on a special new Festive Advent Break this year, which features a ‘moving‘ feast between the hotel and the Priors Hall.”

The Dean of Norwich added: “We are delighted to have such a close relationship with the Maids Head. We share so much common history and there are many opportunities for us to work together to bring more visitors to Norwich.”

The Maids Head’s new entrance is a full redevelopment of the entrance created in 1957. The entrance is in Walter Rye’s extension onto Tombland, which was built in the 1890s. In the early years of the 20th century, the hotel had a garage on this site, but it was closed in the 1920s. The 1950s entrance was created after the hotel acquired the former Cavell Home for District Nurses, which is next door on Tombland.

Local contractors and suppliers have been involved. Turner Group Anglia (Norwich) were the main contractors. Mark Duly, carpenter from Diss, made the reception desk. The wood came from Snetterton Timber Mill. Wensum Carpets supplied the circular mat in the revolving door. The marble top on the reception desk came from Premier Marble, Rackheath.

The Festive Advent Break features dinner at the Priors Hall and Maids Head, a drinks reception in the Deanery, stories of the Cathedral and the Maids Head, plus reserved seats at the Advent Procession on the evening of Sunday, November 27. For more information contact the Maids Head hotel, t. 01603 209955,
e. [email protected], www.maidsheadhotel.co.uk.