As Government guidelines change on Monday, July 19th, we wish to reassure you that we will be continuing with all the excellent measures we have put into place over the past year to help keep both out fabulous guests and fantastic staff safe and well

A massive thank you to everyone who has supported us over these last months, we are incredibly grateful. We are thoroughly enjoying welcoming our guests back to stay and to dine with us and getting back to doing what we all love to do best. 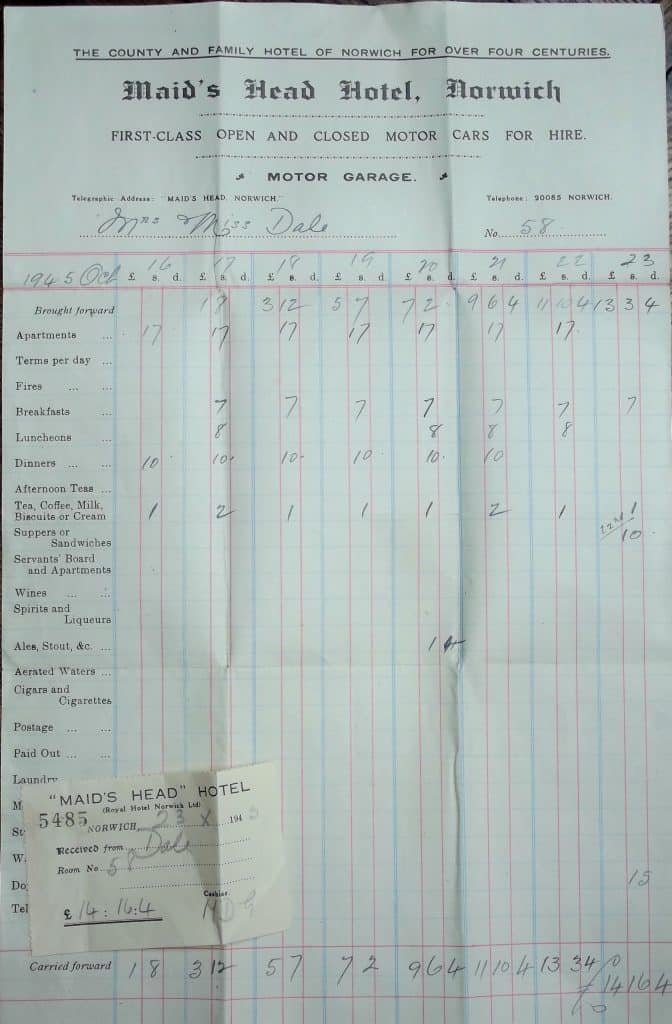 A 70 year-old bill, in near perfect condition, for a one-week stay at the Maids Head Hotel in Norwich, along with a tariff card, has been donated to the hotel and provides a remarkable insight into a visit to Norfolk in the immediate post-war period.

Miss Dale (Esme) died recently aged 94. Her stepdaughter Dorothy Latham found the bill and the 1945 Maids Head tariff, while going through her papers.

Dorothy Latham explained: “At the time of her stay, Esme was accompanied by her mother, Patience, who was very recently widowed. They were living in Newcastle upon Tyne. Over the years, Esme moved house many times, so it is remarkable that the bill is in such good condition.” 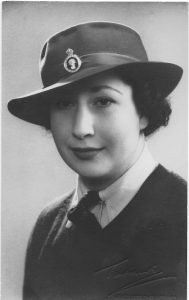 “Esme was in the Land Army during World War II and her last posting was in Norfolk. I have found several old small fuzzy photographs taken at a farm in Norfolk; on the back of one of them, she has written Carr Farm, Kerdiston. Esme was given permission to leave the Land Army in 1945 on compassionate grounds, in order to help her mother, when her father, Joseph, died suddenly. This was the cause of much regret for her, as she loved Norfolk and the Land Army.”

“Before the War, Esme and her parents toured the country in their car for holidays and Norfolk was one of the places they enjoyed. I am sure that, because of all the happy memories, this was why they came to the Maids Head after her father’s death.”

On the back of the tariff Esme Dale has noted the train times for their journey from Newcastle to Norwich, leaving at 8.10am and arriving at 2pm, changing at York and Ely. She added the address of George Smith & Son in Wroxham, so they must have been planning a trip on the Norfolk Broads and also worked out their budget for the week. 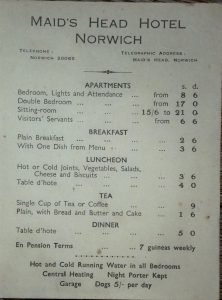 The bill gives a fascinating insight into the Maids Head in 1945. There is a motor garage ‘offering first-class open and closed motor cars for hire’ and there is a line on the bill for ‘servants’ board and apartments’. The tariff promotes ‘hot and cold running water in all bedroom’ and ‘central heating’.

Christine Malcolm, General Manager said: “I am so pleased that Dorothy Latham contacted us. We are going to frame the bill and put it on public display. We are very keen to gather memories of the hotel, so we can build a fuller picture of life at the Maids Head over the centuries.”