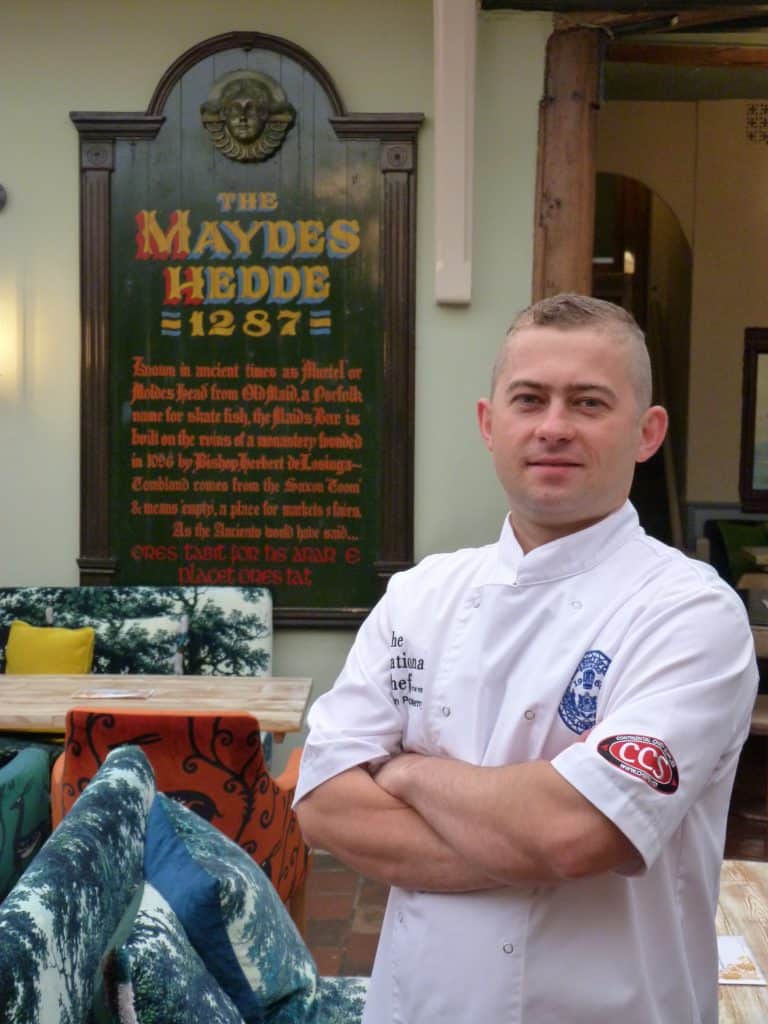 Marcin ‘Magic’ Pomierny, our Head Chef, is one of the Top 10 chefs in the UK, following his appearance in this year’s final of the Craft Guild of Chefs National Chef of the Year competition.

Ten chefs competed in the final cook off at Le Cordon Bleu cookery school in London on Monday, September 7, and the winner, Nick Smith, Head Chef at Vacherin London, was revealed on Wednesday, September 30, during Hospitality Week.

Commenting on the competition Magic said: “It was amazing to be in the final top 10 in the UK. The judging panel was great, featuring some of the best chefs in the country – the Chairman of Judges was Paul Ainsworth. I enjoyed the final a lot and was 100% happy with my dishes.”

“The competition is a big commitment. It begins in February and finishes in September, with a lot of thinking time, preparation and practicing. Combining it with being Head Chef at the Maids Head, along with two young children at home, is quite a juggling exercise. But I was very happy to be involved and will definitely think about entering again.”

Christine Malcolm, General Manager, the Maids Head Hotel said: “Congratulations Magic, we are so proud of what you have achieved this year. To be in the top 10 chefs in the UK is a fantastic result.”

Magic cooked a menu in the final, which followed a brief from the judges, that he submitted to reach the semi-final. The menu featured tapas style starters with Gilt head bream as the key ingredient, a locally sourced lamb main course, and strawberries and cream for dessert. Magic’s Norfolk Lamb Saddle was sourced from Green Farm Lamb, Little Barningham. His dessert was texture of Norfolk strawberry with elderflower parfait, pistachio and English sparkling wine.

To reserve a table for lunch or dinner in the Maids Head’s Wine Press Restaurant, t. 01603 272010, www.maidsheadhotel.co.uk

Click here to watch a film clip of Magic in action at the National Chef of the Year final.

For more information about the National Chef of the Year competition see www.nationalchefoftheyear.co.uk