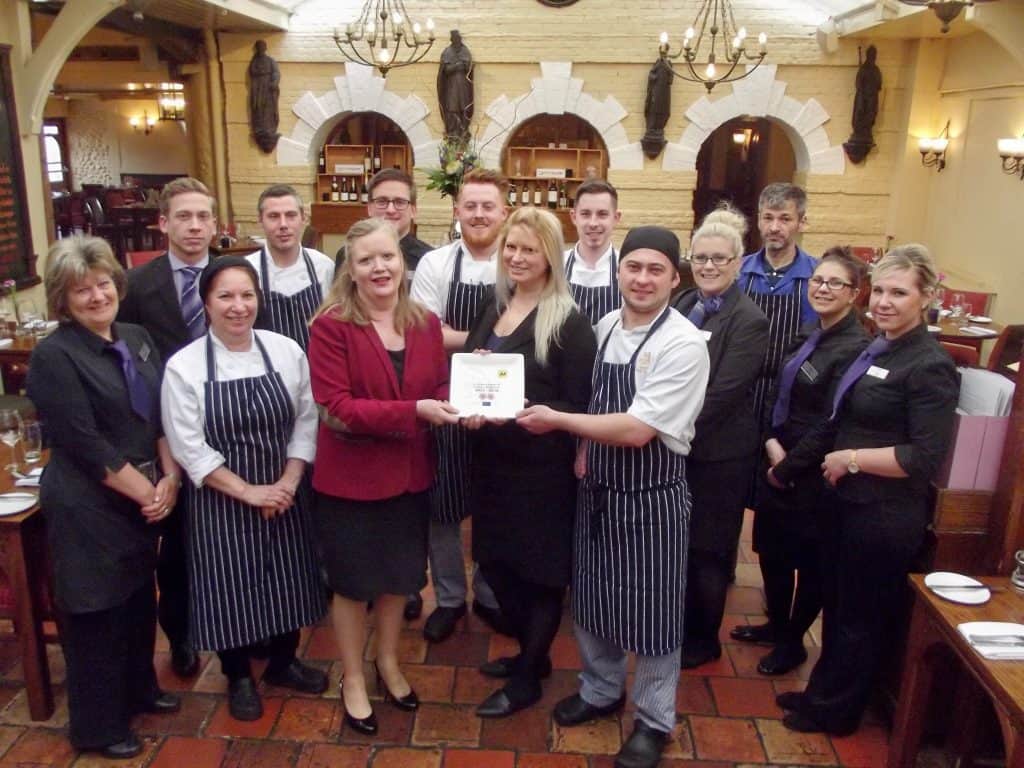 We are delighted to announce that the WinePress Restaurant has been awarded a second AA Rosette, following our annual AA inspection, which rated the food offering at Five Star quality.

The overall Four Star merit score for the hotel across all assessment areas including cleanliness, service, bedrooms, bathrooms, food and hospitality increased to 81% (78% in 2015).

The Maids Head has been privately owned by the Chaplin family since December 2012, which has enabled a return to a policy of local purchasing for food and drink. We have also embarked on a range of sympathetic refurbishment and renovation projects to ensure that the historic building, which we claim to be the oldest hotel in Britain, meets the expectations of 21st century visitors and operates in a much more environmentally friendly way.

Christine Malcolm, General Manager the Maids Head Hotel said: “We are thrilled with the award of a second AA Rosette for our restaurant. Head Chef Marcin ‘Magic’ Pomierny and his brigade, supported by Food Services Manager Katherine Renhard and her team, work very hard to design and deliver exciting seasonally changing menus, using the best of local and regional produce.”

“We are also delighted that our overall merit score continues to increase, “ added Christine Malcolm. “Over the last 18 months we have been very busy installing a new environmentally friendly capillary heating system in the older part of the hotel, upgrading the bathrooms in our modern wing, refurbishing the lounges and all public toilets and most recently adding an al fresco seating area overlooking Tombland and completing a full upgrade of The Paston Suite, our most popular bridal suite.”

Nick Bond, Head of Tourism at VisitNorwich said:” We congratulate Christine Malcolm and her team at the Maids Head on the richly deserved second AA Rosette for the restaurant, and the continuous improvement of their overall merit score. The hotel’s programme of renovation and refurbishment is superb, focussing on the expectations of today’s visitors, but at the same time emphasising the amazing heritage of the site, serving Norwich for more than 800 years.”

The Maids Head Hotel claims to be the oldest hotel in Britain, based on the site being used continuously for hospitality since the early 12th century. Norwich historian Walter Rye, who also owned the Maids Head from 1889 to 1895, considered it to be: “the oldest Norman site in the city after the Castle”.

The Paston Suite has been fully refurbished and redecorated and now includes a roll top bath, walk in shower and his and hers washbasins. Work has just been completed and the first guests were welcomed last weekend.

Public Toilets: £140,000 was invested last year in fully refurbishing all public toilets, including the addition of an accessible toilet near the WinePress Restaurant and new gents’ toilets close to the Minstrel Suite, the hotel’s man function room. The hotel won best English hotel loo, in the Loo of the Year Awards 2015.

Capillary Heating System: a £500,000 hi-tech environmentally friendly capillary heating and cooling system has been installed in 40 bedrooms in the 15th century part of the hotel, which will keep rooms warm in winter and cool in summer. The Maids Head is the first hotel in Norfolk to install the system, which features a heat pump recycling water to capillary mats hidden in the bedrooms’ ceilings. The new system is currently being commissioned and will include individual controls in each room.

Bathroom Refurbishment: Forty bathrooms have been refurbished in the modern wing (£420,000 investment); 16 have been converted into walk in showers to improve accessibility for all ages. The showers and baths each feature panels depicting large-scale photographs of views of the historic city of Norwich, chosen from a competition with Archant’s iWitness24.

Public Lounges: the hotel’s lounges have had a contemporary makeover (£120,000 investment).

Guests Services App: guests now have the latest iRiS guest services paper free app in their bedrooms (£50,000 investment). iRiS was introduced at the end of June 2015 and gives guests the opportunity to plan their stay at the hotel, and order food and drink from the restaurant and bar, in the comfort of their room. Using the iPad based system, also a first for a hotel in Norfolk, guests can book taxis, check airport departure boards, browse the internet, get the latest information on events and culture in Norwich and days out in Norfolk.