During English Tourism Week in March, we opened a series of newly refurbished rooms in the oldest part of the hotel and unveiled a photograph of our late Victorian owner, Walter Rye.

General Manager, Christine Malcolm was joined by the Lord Mayor of Norwich, Councillor David Fullman and the Sheriff of Norwich David Walker to declare the refurbished rooms open for business.

The rooms feature the innovative capillary mat heating system, which has so far been added to 46 rooms. The temperature is controlled using the Ipad’s which feature in every room. 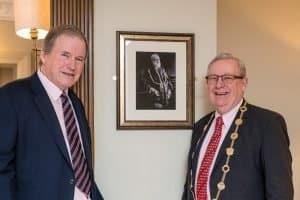 Peter Rye and the Lord Mayor of Norwich, Councillor David Fullman, with the photograph of Walter Rye

We also welcomed Peter Rye and his wife Julie to the hotel. Peter is greatgrandson of Walter Rye, owner of the Maids Head from 1889-95 and Mayor of Norwich from 1908-09. Walter Rye was key to securing the future of the most historic parts of the hotel like the courtyard, snug and bar, but also acquired property on Tombland and expanded the hotel, giving it a firm footing opposite the Cathedral.

Peter Rye unveiled a photograph of Walter Rye,  located in reception. The photograph shows Walter in his Mayoral robes. Walter was the last Mayor of Norwich. His successor became Lord Mayor of Norwich, a title gifted to the city by King Edward VII.