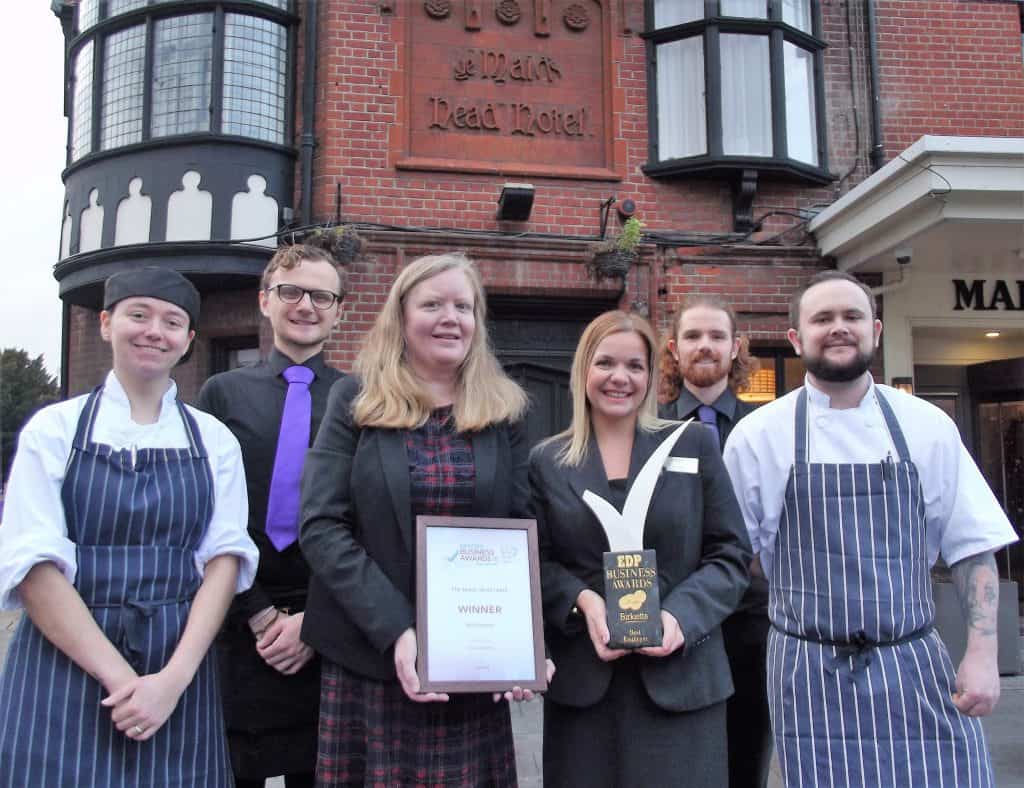 We are delighted to announce that the Maids Head won the Best Employer category at the Norfolk Business Awards 2018 on Thursday, November 22. The hotel was the only hospitality business to pick up an award.


Privately owned since December 2012, the hotel has embarked, over the last four years, on a phased multi million pound renovation and refurbishment programme to ensure that the historic building meets the expectations of 21st century visitors.

Christine Malcolm, General Manager, the Maids Head Hotel said: “We are thrilled to have won the Best Employer accolade at the Norfolk Business Awards. Our staff are at the heart of our renovation and refurbishment programme and are vital to the success of the business.”

This project covers all aspects of the property from bedrooms, reception and public lounges to the kitchens, where work will begin in early 2019. Much of the hotel is listed with the oldest guest accommodation dating back the 15th century. So a sympathetic treatment has been essential.

“Throughout the refurbishment work, we have continued to trade successfully and grow the business,” added Christine Malcolm, “with a reputation for friendly and professional staff and a burgeoning reputation for the quality of the food in the restaurant. The hotel has progressed from AA four star to four star silver and the restaurant from one to two AA rosettes, with ambition for a third.”

Jeanette Wheeler from Birketts Solicitors who judged the Best Employer category said: “Senior management at the Maids Head have made a major investment in driving and improving employee engagement. The hotel has gone out of its way to create an environment where staff thrive through career development and reward and recognition.”

Fellow judge, Tom Earl from Pure Recruitment added: “We were very impressed with the way that the hotel has engaged with the staff during a major change journey. Staff are not only aware of the purpose and values of the organisation; they are evident in everyday operations.”

Dee Willmott, Human Resources Director at Archant, also judged the category and said: “I was equally impressed with the way the Maids Head has engaged with their staff and am very supportive of the process.”

The Maids Head Hotel’s site has a long history; initially the location of the first palace of Bishop Herbert de Losinga in the late 11th century, it became home to an inn called the Murtel Fish or Molde Fish Tavern. The first mention of the inn in Norwich records was in 1287, when the landlord, John de Ingham accused Robert the fowler of stealing goods. The Murtel Fish was an important inn, hosting Edward the Black Prince in the mid 14th century, after he had taken part in a jousting competition in Norwich.

A Paston letter, dated 22 November 1472, confirmed that the name of the inn had changed to the Maids Head. The core of that 15th century inn stills exists. The hotel’s restaurant is located in the inn’s courtyard, and the Yard Bar and Best Beauty are in rooms which date from the period. Bedrooms above the old courtyard also date from the 15th century.