Simon Michlmayr, of Norwich clock and watch makers and repairers S Michlmayr & Company, returned to the scene of his first summer clock repair job as a 14 year-old – the Maids Head Hotel.

Forty years ago Mr Michlmayr, under the watchful eye of his late father Fritz, repaired the mid 19th century clock, which overlooks diners in the Maids Head Hotel’s 2 AA Rosettes Wine Press Restaurant. Now it was the turn of Mr Michlmayr to oversee his assistant, Esme Collins, who repaired and restored the clock. 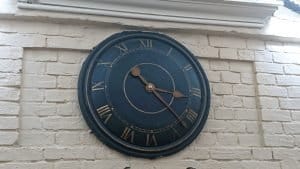 “It has been really interesting to come back to the Maids Head and help repair this historic timepiece again,” said Simon Michlmayr. “I remember being very excited forty years ago as I embarked on my first official job.I am pleased that I was able to give the work to Esme.”

The Maids Head clock, which dates from the 1850s, is weight driven and runs for a week. It was originally a striking clock. The mechanism is accessed from a small cupboard in the hotel’s 18th century Assembly Room, now called the Minstrel Suite, which overlooks the restaurant courtyard.

Simon Michlmayr set up his own business 33 years ago, after his father died. He looks after City Hall’s clock and has worked on many of the church clocks in the area, as well as repairing domestic clocks and wristwatches.

Esme Collins has completed the first two years in the British Horological Institute’s Diploma in the Repair and Restoration of Clocks, with one more year of studying to come.

Christine Malcolm, General Manager, the Maids Head Hotel said. “It has been wonderful to welcome Simon Michlmayr back to the Maids Head to look after our historic courtyard clock, which has been a constant presence in the hotel for more than 150 years. With Simon and his colleague Esme’s expert work, the clock will continue to oversee proceedings for many more years.”