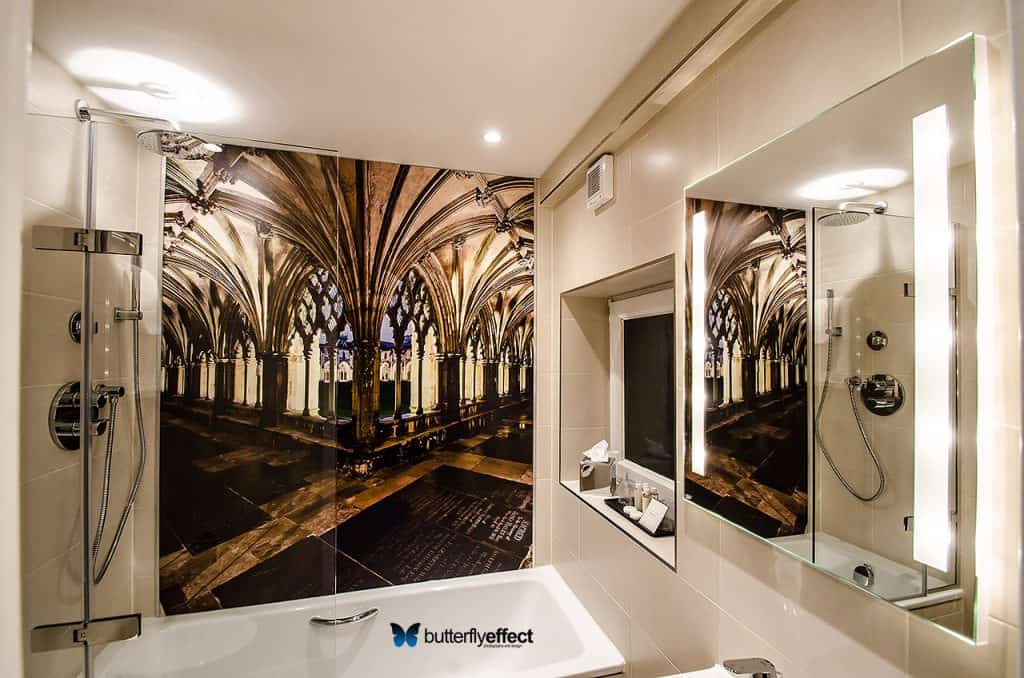 Photographers Darren Carter and Sarah Toon, two of winners of the Maids Head’s competition, run in partnership with Archant’s iWitness24, to have images of historic Norwich included in a major bathroom refurbishment have christened their ‘rooms’.

A further eight bathrooms at the Tombland hotel will be refurbished before Christmas, so that the other competition winners can claim their prize.

Thirty more bathrooms will be refurbished in the New Year and each winner’s photograph will eventually appear in four bathrooms or new walk in showers.

Christine Malcolm, General Manager the Maids Head Hotel said: “We are really pleased with the way Darren and Sarah’s photographs have worked as large-scale images. The first two photographs depict aspects of Norwich Cathedral and create a superb atmosphere in the bedrooms. The other eight winning photographs combine to make an excellent range of Norwich images, which, I am sure, will encourage our guests to get out and explore the city and its heritage.”

Sarah Toon said: “I have always loved photography, but have really got going over the last two to three years. I have a digital SLR, have joined a photography club and entered competitions, but nothing like this. I couldn’t believe it when I received the email saying that I had won.”

“It’ such an honour to be featured in the Maids Head. I’m really blown away by how my photograph looks in the shower. I took it when I was visiting the Cathedral on a course. It was very busy and I had to wait for the right moment. I feel very proud of the end result.”

Darren Carter only picked up a camera for the first time five years ago, when he was on holiday in Greece. He now combines being Marketing Manager for Morgan Sindall, with running a part-time professional photography business called Butterfly Effect with his brother. “I came back from my holiday in Greece, loaded the photographs onto Facebook and got a great response. A friend asked if I would photograph their wedding and I’ve never looked back. We do weddings, people and lifestyle photography and architecture.”

“It’s amazing to see my photograph of the Cathedral Cloisters in the bathroom. I didn’t realise how big it would be. It’s brilliant that it will be used in four bedrooms. I feel very lucky to have been chosen as one of the winners. Photography is an absolute passion for me and being featured in the Maids Head is a great honour.”